Notice is hereby given that the rescheduled Annual General Meeting of the Lancashire Aero Club will be held on Wednesday the 1st December at the Veterans’ Lounge, Barton starting at 19.30 hours.

There is unfortunately insufficient time to call for motions for debate or nominations to the committee at this meeting however any views expressed by members will be carefully noted.

The rule was changed as shown below.

"The quorum at any Annual or Special General Meeting shall  be 25 paid-up full members of the Club or ten percent of the full paid-up membership, which ever figure is the lower."

This infringement update is an amendment to the second in a series of narratives focusing on identified infringement ‘hot-spots’ in the UK. It has been written by members of the Northwest LAIT: NATS Manchester; ATCSL, Liverpool; Barton Aerodrome; and Liverpool Flight School.

The Low-level Route (LLR) is a 4nm wide corridor of Class D airspace within which aircraft may fly VFR without individual ATC clearance subject to specified conditions.

Aircraft may be flown as VFR within the LLR (day or night) without individual ATC clearance, subject to the aircraft being flown:

in accordance with the Visual Flight Rules (SERA.5005);
in a flight visibility of 5km or more;
at an indicated airspeed of 140 kts or less;
if the aircraft is transponder & radio equipped, squawk 7366 and monitor Manchester Radar 118.580 MHz.
If an aircraft is non-transponder equipped, the pilot can still fly in the Low-Level Route without an ATC clearance (subject to the above conditions), but the pilot must monitor Manchester Radar, 118.580MHz.

If an aircraft is non-transponder and non-radio equipped, the pilot can also still fly in the Low-Level Route without an ATC clearance providing they comply with the above conditions.

No ATC service is provided to aircraft flying within the LLR in accordance with the above conditions and all such aircraft are responsible for providing their own separation against all other aircraft in the Low-Level Route at all times.

The previous 7364 squawk procedure for aircraft flying SVFR is no longer valid, since the above conditions are now only applicable to aircraft flying VFR. All SVFR flight will require an individual ATC clearance, and is unlikely to be granted within the confines of the Low-Level Route unless absolutely necessary.

Pilots should not request a Basic service in the Low-Level Route as this is not available inside Class D controlled airspace – if Manchester Radar are able to issue an individual clearance, a Radar Control Service will be provided.

The infringement teams associated with this airspace have noted the risk areas:

Entering and Leaving the LLR
The majority of airspace infringements occur in three areas:

To deconflict Liverpool IFR inbounds to Runway 27 from the Manchester departures from Runway 23L/R the 2 units operate a “tunnel system”. This means that when Runway 23L/R is in use at Manchester, Liverpool cannot just route their inbound traffic straight for final approach. Instead Liverpool need to pass to the west of the aerodrome and descend below 4000 feet before turning downwind descending further to 2000 feet before the western edge of the LLR.

Liverpool cannot vector aircraft east of the eastern edge of the LLR and, therefore, when required to sequence their inbound traffic one method available is to vector traffic towards the northeast of Liverpool’s Class D airspace, which sits above the northern portion of the LLR. The Liverpool traffic must be at 2000 feet to safely pass beneath the Manchester departures whilst aircraft within the LLR can be at 1300 feet and just 700 feet below.

Therefore, any aircraft initiating an early climb above 1300 feet before they have left the northern edge of the LLR pose a serious risk to the Liverpool traffic; in addition, there is an increased risk of experiencing wake turbulence issues. When the Liverpool radar controller observes aircraft climbing early and infringing above the northern portion of the LLR, they are unable to take avoiding action by climbing as this will result in confliction with the Manchester departures, instead the only option available is to make an avoiding action turn. With the resultant delay in flight crew initiation compounded by the rate of turns, the potential for a loss of separation event is increased. 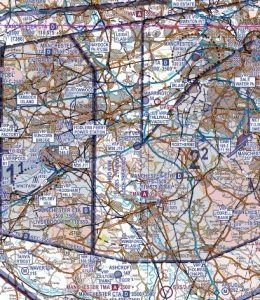 To prevent an airspace infringement, as part of their pre-flight planning and in-flight execution, pilots are strongly encouraged to:

Use a Moving Map and where able, outside the LLR,  Take 2

Use the FMC. In the LLR pilots MUST (if suitably equipped) squawk SSR code 7366 and maintain a listening watch on Manchester Radar frequency 118.580 MHz. Squawking 7000 is no longer permitted.

Elsewhere, pilots operating in the vicinity of, but intending to remain outside Manchester’s controlled airspace bounded by the following co-ordinates:

should squawk 7366 and maintain a listening watch on Manchester Radar frequency 118.580 MHz

If aircraft are fitted with Mode S transponders the Manchester Radar controller will be able to see your callsign on their radar display and will be able to call you if they observe anything untoward. Obtain the Manchester QNH by listening to that given to other aircraft on 118.580 MHz, from the Arrival ATIS (128.180 MHz), Departure ATIS (121.980 MHz), or the MCT VOR (113.550 MHz); on VOLMET North (128.600 MHz), or by asking an adjacent ATS unit. Aircraft should not hesitate to establish contact with Manchester Radar if they require any assistance or are unsure of their position.  Note that the FMC procedures in Manchester’s UK AIP entry at AD 2.22 (paragraph 8) are in the process of being changed to reflect the advice here.

Plan. As part of your plan, build in your climb and descent points when routing in the vicinity of multiple CTAs with differing base altitudes – this is especially pertinent when approaching/leaving the LLR. Know what the VRPs look like and what airspace lies above them or close by. Beware when flying through the LLR as some VRPs are not easy to see, especially when trees are in full foliage.

Avoid flying on the Regional Pressure Setting (RPS) in the vicinity of Manchester and Liverpool CTAs. When flying on the RPS, as it is the forecast lowest QNH for a region, you will probably be higher in relation to the Manchester or Liverpool QNH – and therefore possibly inside controlled airspace without a clearance to do so. If you are receiving a FIS from London Flight Information Service, ask the FISO for the relevant QNH rather than remaining on the Barnsley RPS.

Obtain an air traffic service. Know which ATS unit can provide a LARS. To the south of the Manchester/Liverpool controlled airspace it is Shawbury Radar (133.150MHz) and to the north it is Warton Radar (129.530 MHz).

To transit through the Liverpool CTR, a well-trodden route is to cross CAS from Oulton Park – Runcorn Bridge to Kirby or vice versa. Liverpool ATC will aim to clear the pilot to cross controlled airspace by their requested route as much as possible. However, as traffic levels increase during certain times of the day, traffic may be asked to orbit south of the M56 motorway (northbound transits) or north of the M62 motorway (southbound transits) until the Runway 27 approach is clear and the transit traffic can safely pass behind the inbound traffic. As a consequence, during busy inbound traffic periods, transits may initially be asked to position and route through the LLR and once north / south of the final approach be given a clearance to enter controlled airspace and proceed on their requested/cleared route.

Think MAM TOR. This is a useful mnemonic created by the CFI at Liverpool Flying School, who is an active member of the Northwest LAIT:

Manchester QNH – Get from the ATIS;
Altitude – fly not above 1,300 feet on the Manchester QNH;
Map Navigation – is your route planned?;
Transponder – squawk 7366 whilst monitoring Manchester Radar;
Open Eyes! – keep a good lookout as lots of traffic use the LLR in both directions, not always with a transponder or radio;
Ready – to Aviate, Navigate and Communicate.

It was not possible to run an AGM again this year as there were not enough members present.

The committee has addressed this issue by calling an 'on-line' EGM to discuss the matter.

Member will also be invited to submit a 'proxy' vote to the Chairman if they cannot attend on-line.

Northwestern Strut Move to First Tuesday of the Month 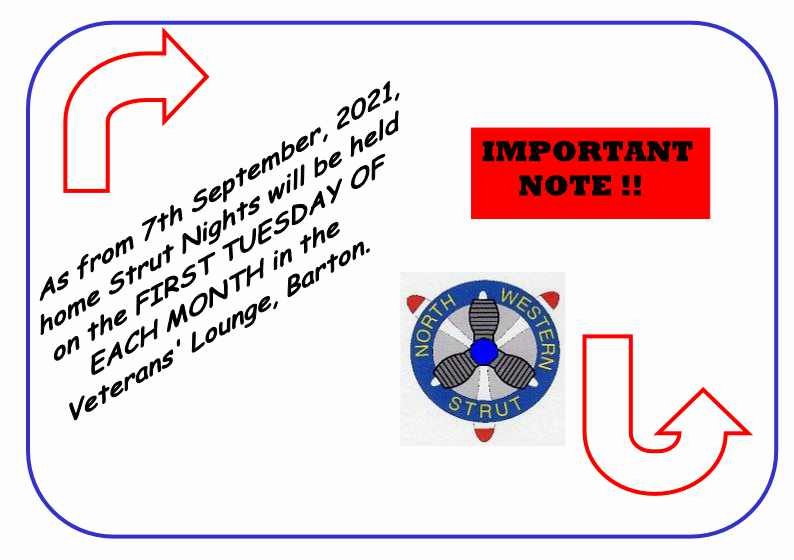